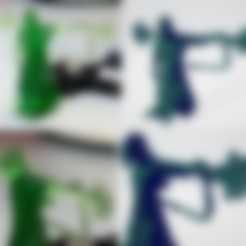 Even within the dogmatic and zealous organisation, that is the Cult of Machines, few can hope to match the fanatism of these frightening monks, who are going so far as to invite the frightening might of the kinetic force into their very own bodies until their skin cracks and their eyes boil in their sockets under the electrical inferno. But the rewards for the faithful far outweigh such petty losses as sight and sense of touch, as they are able to stride into the apocalyptic battlefields of the future almost naked, untouchable by deadly projectiles and shrapnels, for the kinetic force shields their own from the attacks of the unenlightened in a shroud of lighting. And in turn each strike of the arcane weapons of these pilgrims leaves enemies and heretical warmachines alike lying cold and dead, as their bioelectricity is absorbed from their unworthy bodies.

I always felt a certain affection to this model series, since they were some of my very first models. Now, with six good ones, which carry enough bits to remix a squad of twenty if necessary, I feel like a can put them aside for the time being Hope you are as content with them as I am.