Hercules Épitrapézios at The Louvre, Paris 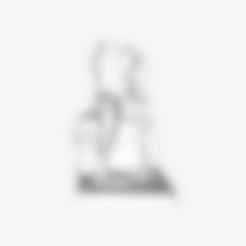 This type of marble representation by Lysippos could be identified thanks to the testimony of ancient sources. Two Latin poets from the end of the 1st Century A.D., Martial (Épigrammes, 9, 43 and 44) and Stace (Silvae, 4, 6) describe a small statue of Hercules in bronze which on the base holds the signature of Lysippos. This statue, now lost, was known under then ame 'Hercules Épitrapézios (from the Greek Epi, 'on' and trapeza, 'table'). The sculpture was carved by Lysippos before 335 B.C., to decorate a table for Alexander the Great. The heroes were presented holding a glass of wine, the head thrown back. It was discovered in 1792 by Gavin Hamilton in Gabies (Italy)

This is one of a series of four variants representing Hercules sculpted by the ancient Greek master Lysippos between 370-300 BC). Son of Zeus and Alcmene, Hercules is probably the most well known and most important Greek heroes, a demi god given immortality. His cousin Eurytheus was force to confront Hercules as his opponent in the famous Labours of Hercules (Hera's candidate for Eurytheus and Zeus's was Hercules). Hercules is known for carrying a large wooden club and the 'Léonte', the skin of the Nemean Lion- the first creature he had to kill in his labours.

The four statuettes featured in the Louvre (all featured on the Scan the World archive) are a collection of reproductions by the sculptor Lysippos who considerably changed the image of how heroes were depicted in art, seen reflecting in their exploits. We can attribute this image through his famous sculpture 'The Hercules Farnese' of the Naples museum and a colossal statue of Hercules sitting.