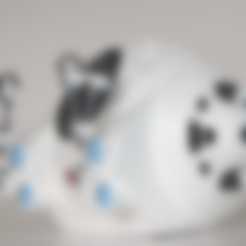 OK, so a while ago and number of the Hutt City Library Staff and I tackled the huge task of printing the magnificent Discovery Model (https://www.thingiverse.com/thing:950664) that was created by metaform3d (https://www.thingiverse.com/metaform3d/about). In my opinion, metaform3d's model is one of the best designed 3D printing models I have ever come across. I learned a lot about good design from working with this project. Anyway, I was keen to print off the EVA pod that also featured in the same films (2001: A Space Odyssey and 2010 Odyssey 2) as a separate project. I had seen a number of models on Thingiverse, but they were just the an STL version of the model that has been circulating around the web since the Internet was created. I see that some people have succeeded in printing them, but the digital model is very poor quality and for most slicing programs, not printable. It was also fairly low polygon.

Going back to the base model which I had in my archives, I carefully made it all manifold, and then went to work smoothing the mesh. The result is a nice hi-poly model with a smooth shape that can be printed with any slicer, even the really old ones. I also added in some supporting sections which snap off. The model will print successfully and tidily without needing the slicer to add support.

Unfortunately the original 3DS file I based this model on is so old and had lost any attribution documents it may have had long before it ever got to me. Sadly I have no way of attributing it to the person who first created it.

There are a couple of errors in the model when compared to images from the movie, particularly around the HAL port on the front and detailing in the back, but it still looks the part. The model shown here has the rear right top port inset when it should really be proud of the surface. This was an error in my part from not looking at the original stills from the film and thinking it was an error on the original model. I have corrected this in the STLs I have put up here.

With regard to painting it, I have taken a couple of liberties. The original in the films is white for almost all of the manipulators. In the painted model here, there are silver sections. Well I'd primed them in black expecting them to be silver before checking the source images. I figured there were already a couple of inaccuracies, so why not another one.

It took 11 hours to print the main body and about 12 minutes for each of the arms. The size used here was chosen to ensure the manipulator arms were a diameter that could have a standard rod size used in place of the printed lengths. The arms are strong enough on their own and have sufficient definition that I didn't need to redo them with dowels.

The model in the photograph was printed using very standard settings; 0.2mm layer height and 15% fill. No supports were required because I have designed in some small removable tabs to support the overhung bits.

The model is fairly large with the maximum dimension being 135mm.

Got the Pod!
Thanks!

That's weird! I have checked and as you say there is no sign of the pod body. I have uploaded the pod body model again, so hopefully it will be there for future downloads. Thanks for bringing this to my attention.

Hello
The downloaded .ZIP file only contains the Pod Arms, but not the Pod itself...
Is that a separate download?