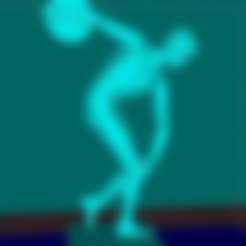 The discus throw (About this soundpronunciation) is a track and field event in which an athlete throws a heavy disc—called a discus—in an attempt to mark a farther distance than their competitors. It is an ancient sport, as demonstrated by the fifth-century-BC Myron statue, Discobolus. Although not part of the modern pentathlon, it was one of the events of the ancient Greek pentathlon, which can be dated back to at least to 708 BC,[1] and is part of the modern decathlon

The sport of throwing the discus traces back to it being an event in the original Olympic Games of Ancient Greece. The discus as a sport was resurrected in Magdeburg, Germany, by Christian Georg Kohlrausch and his students in the 1870s. Organized Men's competition was resumed in the late 19th century, and has been a part of the modern Summer Olympic Games since the first modern competition, the 1896 Summer Olympics. Images of discus throwers figured prominently in advertising for early modern Games, such as fundraising stamps for the 1896 games, the main posters for the 1920 and 1948 Summer Olympics. Today the sport of discus is a routine part of modern track-and-field meets at all levels, and retains a particularly iconic place in the Olympic Games.

The main poster for the 1920 Summer Olympics
The first modern athlete to throw the discus while rotating the whole body was František Janda-Suk from Bohemia (present Czech Republic).[citation needed] He invented this technique when studying the position of the famous statue of Discobolus. After only one year of developing the technique he earned a silver medal in the 1900 Olympics.

Women's competition began in the first decades of the 20th century. Following competition at national and regional levels it was added to the Olympic program for the 1928 games.

The typical discus has sides made of plastic, wood, fiberglass, carbon fiber or metal with a metal rim and a metal core to attain the weight. The rim must be smooth, with no roughness or finger holds. A discus with more weight in the rim produces greater angular momentum for any given spin rate, and thus more stability, although it is more difficult to throw. However, a higher rim weight, if thrown correctly, can lead to a farther throw. A solid rubber discus is sometimes used (see in the United States).

To make a throw, the competitor starts in a circle of 2.5 m (8 ft 2 1⁄4 in) diameter, which is recessed in a concrete pad by 20 millimetres (0.79 in). The thrower typically takes an initial stance facing away from the direction of the throw. He then spins anticlockwise (for right-handers) around one and a half times through the circle to build momentum, then releases his throw. The discus must land within a 34.92-degree sector. The rules of competition for discus are virtually identical to those of shot put, except that the circle is larger, a stop board is not used and there are no form rules concerning how the discus is to be thrown.

The basic motion is a forehanded sidearm movement. The discus is spun off the index finger or the middle finger of the throwing hand. In flight the disc spins clockwise when viewed from above for a right-handed thrower, and anticlockwise for a left-handed thrower. As well as achieving maximum momentum in the discus on throwing, the discus' distance is also determined by the trajectory the thrower imparts, as well as the aerodynamic behavior of the discus. Generally, throws into a moderate headwind achieve the maximum distance. Also, a faster-spinning discus imparts greater gyroscopic stability. The technique of discus throwing is quite difficult to master and needs lots of experience to get right, thus most top throwers are 30 years old or more.