Dido at The Louvre, Paris 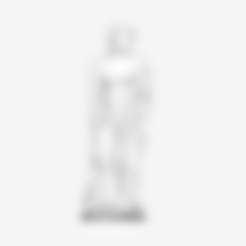 This undated marble statue depicting Dido is attributed to Christophe Cochet (known records of him date from 1606 - 1634). The statue once stood in the park of Marly (France) adorning one of the fountains of Agrippina in 1707. It is possible to recognize the figure of Dido from physical appearance, giving away her life after the departure of Enée, succesfully captured by Cochet. As an unknown sculptor, with his friend Simon Vouet, Cochet lived and worked in Rome between 1615 and 1618 before returning to Paris to produce an official portrait of Marie de Médicis for the Palace of Luxembourg.

The sculpture depicts Dido committing suicide, as written thoroughly about in Virgil's Aeneid. After a dream directly following the death of Sychaeus, her husband, who appeared to her urging her to flee the country and revealing where his gold was buried, Dido left with those who hated of feared his killer - Pygmalion. Some time after Dido and Trojan hero Aeneas fell in love by the management of Juno and Venus. Jupiter, the guardian of Aeneas dispatched Mercury to send Aeneas away who reluctantly obeys.

Dido can no longer bear to live. She has her sister Anna build her a pyre under the pretence of burning all that reminded her of Aeneas, including weapons and clothes that Aeneas had left behind and (what she calls) their bridal bed. When Dido sees Aeneas' fleet leaving she curses him and his Trojans and proclaims endless hate between Carthage and the descendants of Troy, foreshadowing the Punic Wars. Dido ascends the pyre, lies again on the couch which she had shared with Aeneas and then falls on a sword that Aeneas had given her.

During his journey in the underworld, Aeneas meets Dido and tries to execute himself, but Dido does not deign to look at him. Instead she turns away from Aeneas to a grove where her former husband, Sychaeus, waits.