Corinne at The Louvre, Paris 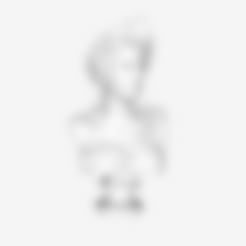 This beautiful marble bust was sculpted by Edme-François-Étienne Gois, a French sculptor.

Born in Paris, Gois was the son of the sculptor Étienne-Pierre-Adrien Gois, with whom he initially trained. He then attended the École des Beaux-Arts, where he won the second prize in sculpture in 1788 and a first prize in 1791. The 1791 work was a depiction of Abimelech Taking Sarah. The first prize was originally awarded to Pierre-Charles Bridan. Gois wrote to the king for another first prize, which was granted. Louis XVI of France hastened to write to the Academy for this award to be presented, and it was immediately given to the Gois.

This bust is a depiction and representation of the eponymous character from the novel, Corinne, by Germaine de Stael, dated 1836. Anne Louise Germaine de Staël-Holstein, commonly known as Madame de Staël, was a French woman of letters of Swiss origin whose lifetime overlapped with the events of the French Revolution and the Napoleonic era. She was one of Napoleon's principal opponents. Celebrated for her conversational eloquence, she participated actively in the political and intellectual life of her times. Her works both critical and fictional, made their mark on the history of European Romanticism.