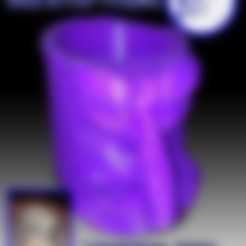 Student create an object by hand in clay with tolerances and 3D printer limitations in mind.

This is an example of a clay cup created using lowfire white clay and glazed with food safe colors. The Digitizer still has a problem with cup openings (as seen in the original scan file) so the STL was imported into TinkerCad where a cylinder was used to hollow out the cup part and a cube was used to flatten the bottom for easier printing.

2 pass scan on digitizer. First pass was cup sitting upright. Second scan was cup on its side.

Printed at 2mm layer height with supports. May be able to print without supports but didn't want to risk it.

Technically Makerbot PLA is FDA foodsafe so I guess you could drink from this. I will be using it as a crayon holder.