Chryses in The Louvre, Paris 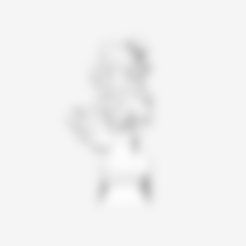 This terracotta sculpture by Michel-Ange Slodtz (Paris, 1705 - Paris, 1764) is titled and depicts Chryses. The bust alongside its counterpart representing Iphigenia, was probably part of the collection of the celebrated accoutnant and art enthusiast Ange Laurent Lalive de Jully. The version in marble, dating from 1740, was commissioned by Rome for a collector in Lyon at the Academy of Lyon.

In Greek mythology, Chryses was a priest of Apollo at Chryse, near the city of Troy.

According to a tradition mentioned by Eustathius of Thessalonica, Chryses and Briseus (father of Briseis) were brothers, sons of a man named Ardys (otherwise unknown).

During the Trojan War (prior to the actions described in Homer's Iliad), Agamemnon took Chryses' daughter Chryseis (Astynome) from Moesia as a war prize and when Chryses attempted to ransom her, refused to return her. Chryses prayed to Apollo, and he, in order to defend the honor of his priest, sent a plague sweeping through the Greek armies, and Agamemnon was forced to give Chryseis back in order to end it. The significance of Agamemnon's actions lies not in his kidnapping Chryseis (such abductions were commonplace in ancient Greece), but in his refusal to release her upon her father's request.

Chryses, with help from Orestes, was also responsible for the death of Thoas. He killed Thoas after finding out that the son of Chryseis, called "younger Chryses", was also the son of Agamemnon. After he killed Thoas, Chryses went to Mycenae.