Capitoline Venus at The Louvre, Paris 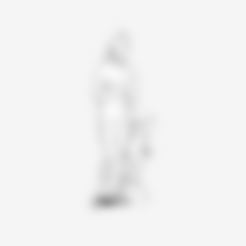 This sculpture was discovered in Acqua Traversa, just outside of rome and is believed to have been sculptued in the 2nd Century AD. The sculpture is part of a series of antique replicas that represents a famous depiction of the goddess Aphrodite (Venus), the best preserved being that in the museum of the Capitole of Rome. Today lost, the Greek model had dated from the 3rd or 2nd century BC and derives from the Aphrodite of Cnidus by the ancient Greek sculptor Praxilites. The Capitoline Venus is a type of statue of Venus, specifically one of several Venus Pudica (modest Venus) types (others include the Venus de' Medici type), of which several examples exist. The type ultimately derives from the Aphrodite of Cnidus. The Capitoline Venus and her variants are recognisable from the position of the arms—standing after a bath, Venus begins to cover her breasts with her right hand, and her groin with her left hand.

This original of this type (from which the following copies derive) is thought to be a lost 3rd- or 2nd-century BCE variation on Praxiteles' work from Asia Minor, which modifies the Praxitelean tradition by a carnal and voluptuoustreatment of the subject and the goddess's modest gesture with both hands—rather than only one over the groin, in Praxiteles's original.