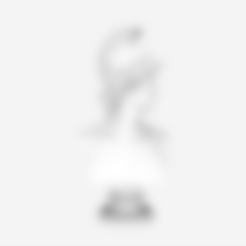 Abdiel was scanned using 214 photographs at the Art Institute of Chicago. He was processed using Reality Capture and cleaned up in Sculptris. A new base was modeled in Blender and unioned.

Info card at the museum says:

Horation Greenough lived in Italy for most of his adult life and is recognized as the first American to pursue marble sculpting as a profession. this bust is one of two sculptures he produced depicting Abdiel, an angel from John Milton's Paradise Lost. With his finely chiseled features, pronounced profile, and elaborately carved Greek warrior's helmet, Abdiel resembles the Classical statue Apollo Belvedere. Through his production of idealist works such as Abdiel and his writings on aesthetics, Greenough sought to educate Americans about art and culture, and to inspire them to produce a national art that reflected democratic values.