Bust of a Woman : Ariadne at The Louvre, Paris 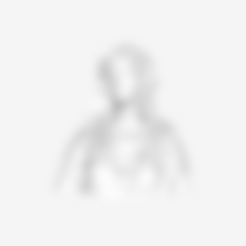 This bust of a woman was long overlooked. It was found in Falerii, about 50 kilometers from Rome, and has recently recognized as being a masterpiece of Etruscan terra-cotta sculpture. Produced in the early third century BC, it falls within the Greek sculptural tradition of the classical period. The young woman, who may be Ariadne, is veiled and crowned with vine branches and leaves and probably belonged to a cult group depicting the wedding of Dionysos.

Having been long overlooked, this terra-cotta bust of a woman was recently connected with a fragmentary Etruscan statue discovered in 1829 at the site of Falerii, north of Rome. The work was part of the Marquis Campana's collection until 1861, when it was bought by the French state; it came to the Louvre two years later. The statue is in several parts and was modeled by hand. It retains traces of polychrome painting: blue, yellow, and purple on the clothing, pink on the face, and brown on the hair. The extraordinary skill with which it was made marks this work out as a masterpiece of Etruscan terra-cotta sculpture.

This statue is an original work made in Falerii in the first decades of the third century BC, during the early Hellenistic period. It is nevertheless imbued with a certain classicism inspired by Greek sculpture of the fourth century BC. The features of the face, which is a regular oval, and the hairstyle, with wavy locks arranged on either side of a triangular forehead, are inspired by the work of Praxiteles or his followers. The treatment of the drapery, with the sculptor making use of effects produced by chiaroscuro and the various materials, is reminiscent of that of sculpted female figures of the second half of the fourth century BC, particularly in Attic funerary stelae. Even the young woman's pose - she was probably standing, her right arm drawn back in an unveiling gesture - is similar to those of classical figures sculpted in the round or in high relief.

This life-size statue of a woman, veiled and wearing a crown of vine branches and leaves (an attribute of Dionysos), probably represents Ariadne. She held the border of her cloak with her right hand, suggesting the unveiling gesture (known in Greek as 'anakalypsis') that is characteristic of divine marriage scenes. The figure of the women was probably part of a cult group along with her husband, the god Dionysos - iconography found on many red-figure vases made in the Falerii region. In the fourth and third centuries BC, the cult of Dionysos was extremely popular in Greece, but also in Campania and Etruria, particularly Falerii. According to certain Latin texts, the city was supposed to have contributed to the spread of Dionysiac rites to Rome and was partially responsible for the Senate decree of 186 BC, suppressing Bacchanalia and the worship of Dionysos.