Bacchante with Tambourine and Child at The Louvre, Paris 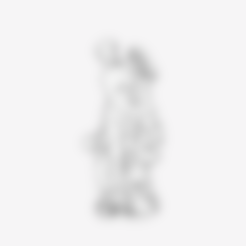 This marble sculpture was executed under the commission of Marc-René d'Argenson, the marquis of Voyer, the governer of Vincennes but also an amateur member of the academy. It was sculpted in 1730 by Augustin Pajou.

In Greek mythology, maenads (or bacchantes) were the female followers of Dionysus (Bacchus in the Roman pantheon), and the most significant members of the Thiasus, the god's retinue. Their name literally translates as "raving ones." Often the maenads were portrayed as inspired by Dionysus into a state of ecstatic frenzy, through a combination of dancing and intoxication. During these rites, the maenads would dress in fawn skins and carry a thyrsus, a long stick wrapped in ivy or vine leaves and tipped with a pinecone. They would weave ivy-wreaths around their heads or wear a bull helmet in honor of their god, and often handle or wear snakes.

The maddened Hellenic women of real life were mythologized as the mad women who were nurses of Dionysus in Nysa: Lycurgus "chased the Nurses of the frenzied Dionysus through the holy hills of Nysa, and the sacred implements dropped to the ground from the hands of one and all, as the murderous Lycurgus struck them down with his ox-goad." They went into the mountains at night and practised strange rites.

In Euripides' play The Bacchae, Theban maenads murdered King Pentheus after he banned the worship of Dionysus. Dionysus, Pentheus' cousin, himself lured Pentheus to the woods, where the maenads tore him apart. His corpse was mutilated by his own mother, Agave, who tore off his head, believing it to be that of a lion. A group of maenads also killed Orpheus.