Artemis at The Louvre, Paris 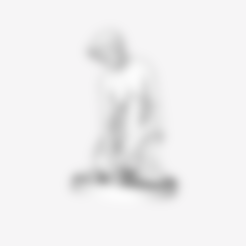 The legend of the huntress Artemis as a virgin, has a double origin- Boeotian and Arcadian. The first gives her father, Schoenée, the son of Athamas and his mother Clymene, daughter of Minyas. The second attribute authorship to LASOS, son of Lycurgus. His father, who did not want a girl,was to abandon it. It was to be collected by a bear then by hunters, which explains her masculine side. It will kill the Centaurs Rhoecos Hylaeos and attempting to rape her and will be a candidate from the Argo, along with the Argonauts set out to conquer the Golden Fleece. Jason deny the presence of only one woman on board. Atalanta beat Peleus to the fight at the funeral games of Pelias, organized by the Argonauts revenues in Greece. She will join, thanks to the intervention of Meleager, the ranks of hunters parties killed the boar of Calydon despite the hostility of Ancaeus and Cepheus and others. It hurt the animal with an arrow before he was killed by Meleager. To thank her, it will offer him the remains. Meleager will kill his uncles who were trying to seize the trophy. He will be punished by his mother, Althea, which forbid him to marry Atalanta. His father, who will teach the existence of his daughter, require her to marry. She did agree to marry that one who could beat the runner and was willing to die on failure. All contenders will lose life whatever the obstacles placed on him. A young man (Milanion in Arcadia, Hippomenes Boeotia) will receive three golden apples of the goddess Aphrodite (from his orchard Tamasos, Cyprus) that it will launch during the competition. Atalanta will stop to pick up and will be defeated. The pretender, who does not respect its commitments to Aphrodite and dare eat his union within the walls of a temple, will be transformed into a lion. Another tradition claims Atalanta is the mother of Parhénopaeos "son of a virgin" abandon it to peasants.