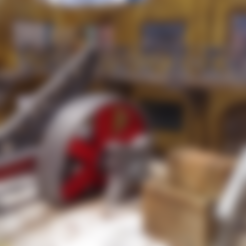 Sing along..."And did those feet in ancient times...". Here is one of those dark satanic mills (or factory) that provided work for the masses in Victorian times. Hard work in dark, grim, unsafe surroundings for little pay, or as the owners would call it - a holiday camp for the lower classes.
This is a modular building, so that you can design your own victorian industrial paradise for the oppressed masses of London's East End.
I made this and the rest of the range of 28mm buildings to accompany the "In Her Majesty's Name" set of wargaming rules by Craig Cartmell and Charles Murton, published by Osprey Wargames, and because I've been watching "Ripper Street" on that new-fangled television apparatus. They should suit any variety of Victorian building usage that needs a taste of the old East End, and many of the buildings will still be alive and kicking in 'Station Roads' up and down the country and so useful for train scenery building.

Note: This series of models does not condone murder, violence or other mayhem, and sightings of the Ripper should be reported to the Metropolitan Constabulary at Great Scotland Yard preferably via telephonic device on Whitehall 1212

Notes:
As usual, I try to ensure that all parts are printable flat on the plate without the need for supports

Painting
Undercoated in gesso
Painted in acrylics and varnished

Design
This design is culled from contemporary photos and a spot of help from Assassin's Creed victorian offering (Can't remember the name - Syndicate?). I've tried to make it as generic and modular as possible so that any number of designs can be produced and I would love to see any makes. I've tried to add build notes into the .jpg / .pngs. Please let me know if you hit a problem I haven't foreseen.
I've added several lengths of guttering which should cover most eventualities - if not, grab a hacksaw!
Most of the buildings in this range have filled-in windows because they had no interior. Because this one does have an interior I have made open windows, but if you want to keep the same theme I have added two plates. The first is one blank one to glue inside the windows if you're not using the interior. The second one has a filled-in window and is similarly glued inside the window opening if you wish to use the building interior but want to keep the window filled in, If my ramblings don't make sense I've added a sample to the interior design screen shot on the left hand side.
As you can see from the piccies, I haven't even finished my own models yet, but thought I'd better paint them up to get them out!
Late addition (not in documentation/pictures) - two blank wall pieces