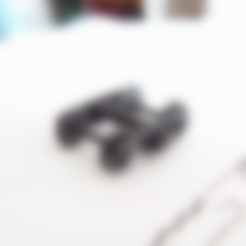 Railcar bogie, model 18-100. Used for most soviet/russian railcars from 1960s till now.

Three variants of crossbar included: without mounting hole, with one, and full variant with hole and sliders. Real bogie always have sliders, but it is hard to print while you often even don't see sliders after wagon mounting. So I made simplified variants.
Two variants of wheel: old with holes (was used till the end of XX century), new without ones (used now).