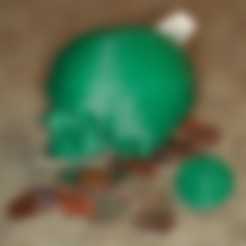 A friend asked if I could help him with a Christmas gift for a friend by making some kind of bank on my MakerBot. Well I really liked Sublime's Skull Bowl[1], and it seemed like the perfect thing to make a cool looking bank out of. My friend said it would be OK if the bank didn't open, but what fun would that be?

So I used the Skull Bowl model, and used Syvwlch's great screw library[2] to put a screw in plug in the base of the model to get coins out of, with a little tab on it to make it possible to turn. Intersecting the screw with the skull took OpenSCAD some time, but it looks great when closed. The slot for putting coins in is in the back of the skull on the top piece.

The zip file contains everything you need to mod. The Skull has been resized a few times, so the dimensions don't match the original. Since I'm not sure what the scale factor is (from memory, 60%?), I've included my copies. They probably aren't the latest version, since I see it's been updated. The three OpenSCAD files are in there for making adjustments.

Included in the pictures to the side are a cut down version of the screw section so that I could test it without having to print the entire skull, and the first version of the lid where I put the wrong slot length in so quarter's wouldn't fit.

Warning: I couldn't get the lid to fit flush. When I view it in OpenSCAD it's fine, but no matter how many times I flipped the lid along the Y axis the first layer always seemed to print in the same direction. I have four copies of the lid. I hope you have better luck than I did.

There are just three pieces to the model. The plug needs to be printed with support since the base isn't flat, but the other two pieces print just fine. There is think cylinder inside the main skull body acting as support for the start of the screw opening during printing (see pictures). Once the print is done it pops right out.

I designed the bank for standard US coins. Pennies, dimes, quarters, and nickels all fit without a problem. I believe a Sacagawea might fit, but the diameter would be really close to that of the coin slot. The opening in the base is bigger.

In the OpenSCAD file for the lid, there is a comment giving values you should be able to use to make the coin slot accept Euro coins, based on the measurements on Wikipedia. Changing the slot for any other currency should be just as easy. If you change the slot size, make sure to position it so that it doesn't interrupt the ceiling in the lid, because you may need support if you do that.

The hole for the plug is larger, and probably wouldn't need adjusting.

As for assembly, the plug just screws in (Sywlch's library produced a fantastic fit), but the little tab I put on to provide a handle doesn't give much grip so it can be tough to unscrew if the fit is tight. The lid and the base can just be glued together, there are no alignment holes so you'll just have to eyeball it.

I brushed the inside bottom of the base with acetone to ensure the threads didn't start getting knocked loose with coins rattling around in there.