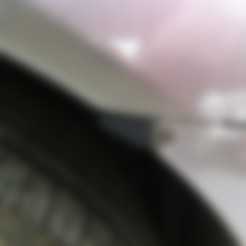 A few months ago, my father noticed a problem with my Honda Odyssey. My front bumper was coming off on the right side.

As it turned out, the end of the bumper has broken off right where the bumper was attached to the frame. I probably caught the bumper on something backing up, but the piece was totally gone.

The duct-tape solution was ugly, so I designed a simple piece in OpenSCAD to glue to the end of the bumper. It took a couple of tries to get the measurements right. It has a large flat surface (to for a strong glue bond), a hole in the middle (to replace the screw hole that broke), and a little side piece to match the existing lines.

If you happen to have a 2000 Honda Odyssey and managed to break the same part of your car, you're in luck.

To design it, I took the measurements and designed a flat rectangle in OpenSCAD. I punched a hole in it for the screw, added the side wall for looks, and then cut an angle so the piece would fit in the limited space I had to work with.

Print it out, glue it on, let it set, screw the bumper back in place.