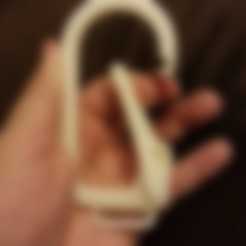 This thing is based on thing 489709, by Charlie1982. I created the carabiner from scratch to suit my needs better, but only modified the clip slightly. The modified clip should be somewhat easier to print since I gave it more contact area with the build platform. It should also last longer since I modified the gap it has between its legs. It might not be totally compatible with thing 489709 because I made the clip's pins slightly bigger, so they might be too tight for it.

For better results, print the clip with at least 85% in fill. The carabiner itself has worked fine for me at 60-65% in fill.

If you print them together, do so at a high in fill percentage (~80-85% or more) to have a longer lasting clip. If once assembled the clip does not move freely, you might have to slightly sand the holes in the carabiner.

I have not uploaded the plug that goes in the SpringClip. I'll get to that soon.