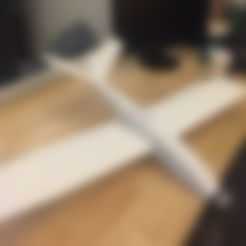 3D Max scene file with all the components This is the first ready to fly version of the plane, you can download the STL files and print your own plane now. You may notice that I changed the inverted V-tail for a normal one, I still want to try the inverted version on the fiberglass model, but for the printed one it is better to keep the tail off the ground on landing. I also included an OBJ file with the original mesh for all the parts, so that anyone can modify them to their liking, or create new designs, many parts need to be subdivided before exporting the STL file, please check with the original STL files for reference. a new design I'm working on for a travel UAV/FPV airplane. This version has a wingspan of almost one meter, so it's relatively small. After I've completed and test flown I plan to make a 30/50% larger version to carry a GoPro camera in the nose for aerial photography. The airplane is meant to be modular, the nose and tail sections are joined to the center section with nylon screws, the wings and stabilizers are detachable and even the wing panels can be kept separate to simplify repairs and testing new design ideas. Some comments on the design. -The wing sections are meant to be printed in a "Spiral Vase" mode, the internal spars and/or printing settings should be adjusted so that the printing head makes the spars by moving in from the bottom of the wing until touching the inner surface of the top of the wing, so there is only one seam at the bottom. -I have carefully modeled the fuselage parts so that most of them will print as a two perimeter shell using a 0.3mm nozzle, except where more thickness is needed. -The wings need two carbon fiber tubes, 8 and 3 mm diameter, the stabilizer also uses a 3mm carbon fiber tube spar. -The plane will use one brushless motor mounted on the tail with a 6" propeller. InstructionsI used a 0.3mm nozzle to print all parts, for some you need to adjust your perimeter width so they will print with one or two perimeter shell thickness, for example the wings are printed in a spiral vase mode with one perimeter thickness (0.2mm works well), same for the tail surfaces. The fuselage parts print correctly with a 0.3mm perimeter thickness to produce a two perimeter thick shell over most of the length. Fuselage_F STL mesh is solid, it needs to be printed either on spiral vase mode (0.3mm extrussion width) or as a 0% infill with two .3mm perimeters and no top/bottom layers. Nomad UAV bill of materials. All this components (except the 1mm steel wire) were bought form HobbyKing.com, but similar ones can be found elsewhere and this list can be used as a reference. -Elevon servos: Turnigy TSS-10HM Digital Micro Servo X2 -Flaperon servos: D05010MG 5.7g / .61kg / .07sec Digital Metal Gear Micro Servo X2 -Motor: hexTronik 24gram Brushless Outrunner 1300kv -ESC: Turnigy AE-25A Brushless ESC -Battery: 3 cell, 1500mAh LiPo. -R/C receiver: OrangeRx Open LRS 433MHz 9Ch Receiver -Elevon servo pushrod link: Ball and roller link 4.8x2x18mm (10pcs/set) & Threaded Ends M2xL20mm -Flaperon clevis: Nylon Snap-Click style clevis for 1mm rod -8x4 propeller (PRODUCT ID: H8011A ) -M3 nylon screws and nuts. -3mm outer diameter nylon pushrods. -1mm steel wire for elevon and flaperon linkages. -8mm and 3mm diamter carbon fiber tube for wing and tail spars, -1,5mm diamter carbon fiber rod for control surface hinges. -Glass Fiber Cloth 450x1000mm 48g/m2 to reinforce the inside of the fuselage nose section.