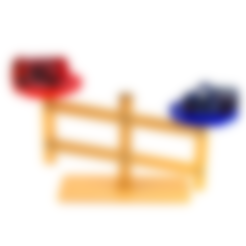 The Roberval balance is a weighing scale with two horizontal beams one above the other connected to two vertical beams supporting the weights to be compared.

Use this tool to compare the weight of any two small objects! It shows differences as small as 1 gram.

See https://en.wikipedia.org/wiki/Roberval_balance for more historical and scientific information about the Roberval balance.

Notes:
Print the base, top bar, bottom bar, riser, 2 plate holders, 2 plates and 2 plate sleeves. The full model is not meant for printing, just to show the assembly.

Using M3 screws attach the plate holders to the top and bottom bars and the bars to the riser. I had some partially threaded screws (meaning the lower half of the screws have threads and the upper half is smooth) so I used that but regular screws work too.

Glue the riser into the base. M3 10mm partially threaded screw

Kindergarden: Describe and compare weight. Which object is lighter and heavier.

Grade 2: Measure weight in standard units. Add standard weights to find the weight of an object.

Measure the weight of an object by adding numbered standard weights to balance the scale.

Measure to determine how much heavier one object is than another by adding numbered standard weights to balance the scale, expressing the weight difference in terms of a standard weight unit.

Measure and estimate masses of objects using standard units of grams (g), kilograms (kg), and liters (l).1 Add, subtract, multiply, or divide to solve one-step word problems involving masses that are given in the same units by using the balance to represent the problem.