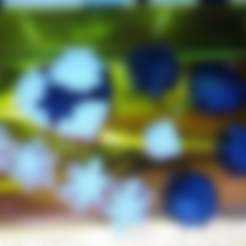 CrazyJaw did a great job with his keychain sized heart gears. But if anyone is considering building more than one, it could take a while to print. So, I applied JoeyC's dual-strusion script (http://www.thingiverse.com/thing:24195 - which itself is a derivative of thorstadg's work) to print two of each file object(s) at once.

To allow this to work, I had to re-organize the objects a little.
- The large plate is the busiest and had to do some interesting arrangements due to the size of the parts.
- I doubled up the number of pins so that when dual-struded a complete set is made. Further changes should probably do a full set with one extruder so that dual-struding produces two sets to match the two hearts that are produced.
- the center.stl file is the original file untouched.
- the small plate just moves the parts into a vertical line

BTW - this was specifically done for a Replicator. The nozzle separation on other printers may require further tweaking.

Download.
Slice normally.
Apply the DualExtrude file to the generated gcode files. (I named my output files with an '_dual.gcode' to help tell the difference)
Run the new GCode through your normal routine. (for me it was open in RepG, and export to .s3g.)