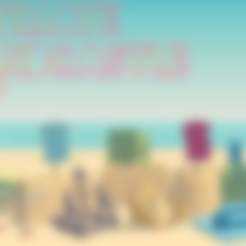 Build Egypt, build Rome, or build your own kingdom! This set of objects is a must print if you plan on going to the beach any time soon. It comprises three unique castle molds, an adjustable catapult for Castle Battle games, flags and banners for decoration or game objectives, three key sculpting tools for custom builds, a set of tetrahedron and pyramid tessellation molds for tessellating in three dimensions and creating large pyramids, and a brand new arch creator mold!

How big can you build it? Mathematically speaking, the limit does not exist!

It's no surprise that the ancient Egyptians were some math wizards, after thousands of years, their amazing monuments still stand.

This kit includes two dynamic sand molds that create tetrahedron and pyramid sand blocks. When stacked in the right manner, they tessellate in three dimensions (see picture). Moist sand can stack on itself remarkably well, even at angles close to 90 degrees perpendicular from the ground. When tessellating with these molds to create a larger pyramid, the graduating slope is about 55 degrees which allows you to build incredibly large pyramids.

Use these Golden Tessellators in a Castle Battle game as an game objective or just make giant awesome pyramids!

( Fun Fact ! - Did you that the ancient Egyptians were able to accomplish the seemingly impossible task of constructing the famous pyramids by moving the massive blocks on a sled that moved over wet sand? Dampening the sand in front of the primitive device reduces friction on the sled, making it easier to operate. Who would have though it? Sand and water. I bet they could make some great sandcastles too! )

The Romans used mathematics for its practical applications and with brute force created some of the most astonishing structures the world has ever seen. By using an arch design, tall structures could be made even taller. The roman aqueducts and Colosseum were designed with the inherently strong support of arches, and still stand today!

The new Arch Mold allows you create your own bit of Rome. After the two part mold is fitted together on a sturdy base of sand, plop some muddy/wet sand in between pat it in until it is dry and hard. After a few times plopping and patting the lower half of the mold can be removed, followed by the upper half to reveal your solid Roman arch. Arrange sever arches in a line to make an aqueduct, can it transport water?

( Fun Fact ! - Did you know that the recipe for concrete was forgotten after the fall of the Roman Empire in the 5th century and not rediscovered until the 18th century? What a bummer! Find your perfect sand recipe and don't forget it! )

Making beautiful castles is fun, but not nearly as fun as destroying them! Have fun with it in this game I like to call "Castle Battles Classic"

1) To get started, print out the Omni tool, assemble a catapult, and head to a beach. On the side of the Omni Tool there are two wedges that protrude. You can drag these wedges across a flat area of the beach to make parallel lines in the sand. Make more lines perpendicular to those you have a nice Cartesian grid with square units that measure 6 x 6 inches.

2) If your playing with a friend, make sand castles or sand kingdoms on opposite sides of the grid using the castle molds or the toolkit.

3) Add flags and banners to the castles or battlefield as player pieces or objective pieces.

4) Game on! After determining who goes first, roll a die. The player can now do only one of three things, move his/her catapult an amount of units equivalent to half the roll, and rounding down if the roll is odd (i.e. the player rolls a 5, he/she may move left right up or down only 2 units, a roll of 6 allows 3 movements, and a roll of 1 allows no movements), fire from the catapult a number of times equivalent to the roll, or add/fortify a structure on their side of the grid only if a 6 is rolled.

5) If a player launches a projectile into the grid unit of the other players catapult (or catapult placeholder) the opponent must reset their catapult to the starting unit.

- Catapult power is adjusted by raising or lowing the rubber band's anchor points along the hooked front rails, and can be done so at any point in the game.

- Marbles make for great projectiles, but don't aim them at your friends, animals, or your friends animals!

- Flags make for great place holders for catapults if you catapult supply is low. If your game mode allows it, use multiple flags per player to act as different offensive positions to switch from.

- The grid battle field allows for up to four players if you dedicate each side to a different castle or kingdom.

- This game is not the only game you have to play, make your own or make additions to these rules and put them in the comments, I'd love to hear them!

Hello Thingiverse community! This is my first ever thingiverse submission which I entered for a challenge back in 2015 but did not win. I noticed that a few people were interested in it so i try to keep it up to date if mistakes are found. I hope you like it. Printing all these parts is not easy for my as i do not have a printer of my own, but I will try to get them printed and upload pictures as soon as i can. If you have any complaints about any of the objects, please let me know and I'll try to make corrections right away. Feel free to ask questions or give suggestions.

-All objects were created in Google Sketchup.

-A majority of the objects are very printer friendly any require no supports. I would recommend using supports for the Omni-tool, the Scooping tool, and the Wall mold.

-After printing the Tessellators, use a short bit of coat-hanger rod as the axis on which the side flaps can hinge.