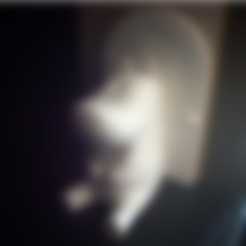 Update 2018-05-06: Previously uploaded version incorrectly had space between Moomin's back and the door. This is addressed in V2.

I made this for my wife's birthday to keep her books from tipping over.
It's as a remix of Moomin by Jeroentjj.

The weight of the books placed on it will keep it from tipping over. I recommend you put thin self-adhesive rubber feet on the bottom to keep it from sliding.

There are two versions; one has the text "A door to another world" on the flat surface where the books will stand, the other has no text at all.

The print in the photos have just had the supports taken off and self-adhesive rubber feet added, no other post-printing was done. The eyes and eyebrows can be painted later.

The texture visible on the bottom of the print in the photos is due to not cleaning the print platform after the previous print.

Notes:
Supports are needed to support the head.
I printed with 0.1 layer height at 100 mm/s, 4 shells and 20% infill. The print is VERY sturdy.

Hi! I'm a tinkerer, designer and maker from Sweden. If you like my designs, feel free to leave a comment. :)