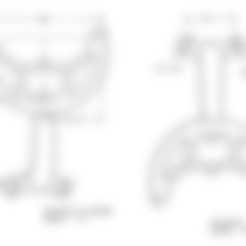 The original ceiling blade bracket broke, but instead of buying one of equally poor resistance, I made a new one out of ABS. The 3D printed part is actually stronger than the metal one. How do I know that? I loaded another metal bracket of the same fan until it broke. Then I did the same thing to the plastic one, but it did not break under the same load. I ended making 2 brackets, but I now have the confidence it won't break in use.

This part must be printed with supports, with the motor mount holes side up (~170° to what the preview shows). I printed it with 65% infill and it holds up nicely under load.

Print and use at YOUR own risk. I have not done any exhaustive testing to see how long it will last under normal ceiling fan use. Proceed with caution. The blade mounting holes are NOT tapped. You will have to do that manually after it's printed.

For an increased safety factor, use longer screws and a nut, instead of relying on the plastic thread alone.

I included a simple drawing in the pictures showing its dimensions. Those are given in millimeters, if it was not obvious. Though it says "Scale 1:1", I have no idea if printing it would scale it differently.

EDIT (19/Sep/2017): The 1st bracket that was put in service finally failed after a little over 3 years of service. I'll reinforce the area that failed and repost the new version as soon as it's ready.