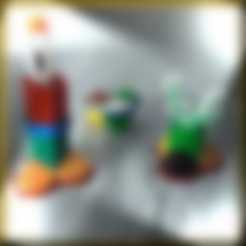 At the origin of the project is the idea of modelling a honeycomb. The cells (or cells) of a honeycomb are tubes of hexagonal cross-section whose bottom is not flat, but rather resembles a roof made up of 4 diamonds. These cells can be interlocked, hence the idea of this set of boxes. The diamonds have become squares for balance.

The photographed makes were made with PLA (Chromatik). Outside the cover no support (or raft or raft) is necessary (just sometimes an improvement of the tray).