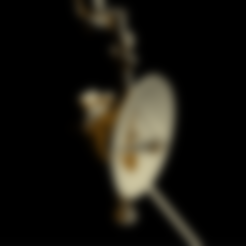 The twin spacecraft Voyager 1 and Voyager 2 were launched by NASA in separate months in the summer of 1977 from Cape Canaveral, Florida. As originally designed, the Voyagers were to conduct closeup studies of Jupiter and Saturn, Saturn's rings, and the larger moons of the two planets. After making a string of discoveries there -- such as active volcanoes on Jupiter's moon Io and intricacies of Saturn's rings -- the mission was extended. Voyager 2 went on to explore Uranus and Neptune, and is still the only spacecraft to have visited those outer planets.