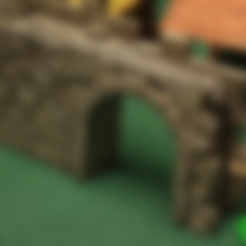 The attached represents the ruins of a Roman archway - I made it for 28mm wargames scenery for use in the dark ages period, but obviously, given the durability of roman remains, it can be used in any post-roman period. It's fine for D&D use also.

Notes:
With support on, this wall will print out in one piece. However....
The sharp-eyed amongst you will know that I usually put a few 28mm figures in for scaling purposes. The reason I haven't here is that the model is a 60% medium res prototype, and I'm finding that the concrete/aggregate wall filling is making the file a bit of a memory-buster. As I was quite pleased with the way the prototype turned out, I published it 'as is'. I'll add a new photo when I've persuaded my computer to make an effort! (Or chop the file in two if it continues to sulk)
1.1 Finally got the old PC to behave - re-scaled model and photos attached 23/03/2017