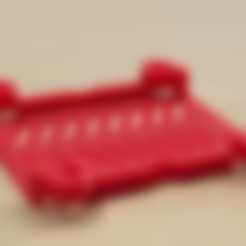 Didn't feel comfortable putting pressure on the VTX by placing it under the strap, so I designed this 30x30 stack mount.

It still has plenty of air around it (vent strips on the bottom, side-entry, open top) - but I have yet to test it in the field (hopefully it won't melt the PLA!). You also still have access to the button and can see LEDs. The USB port is a bit inaccessible, but then again, you only need to cut the zip tie and lift it a bit.

It's a tight fit, so one gotcha is that you need to align the both the nuts on the bottom and the ones on top (which you need to screw in before placing the VTX in the mount) so that they have a flat side parallel to the VTX, and not an angle (see the last image).

PS: I originally printed one in PLA, but it shattered after a failed powerloop (no direct impact, as far as I could tell), so I'm re-printing it out of PETG.