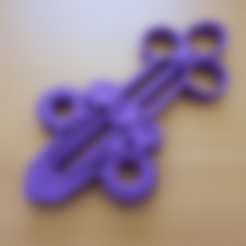 Having managed to learn the basics of Fusion360 I wanted to do some kind of grabtoy, similar to the ones I made with OpenSCAD. A key requisite was to design the thing so that it could be printed without supports and already assembled in place, ready to use right from the printer bed.

I had this memory of a very cool ice cube push plunger claw tongs my parents used to have, and initially tried to go in that direction. Something I wanted to change though was the push-to-open action into push-to-close, because you kind of close the hand when you push, right? So that was another requirement for the design.

I ended up with this overcomplicated geared approach to the thing, and after seeing it in action it reminded me of the mouth of that alien in the movie "Predator", so I decided to call it Predator Action Pliers. For building the gears I used the Helical Gear Generator by Gear_Down_For_What.

The thing looks mean but its grip is actually not very strong. In fact as a grabbing tool is not very useful at all. Still, it prints-in-place without supports and it closes when you push, so I think the design specifications have been met, making the project a great success.

It printed beautifully, but it took awhile to free up a gear... initially it wasn't opening/closing... but all good now!!! SUPER JOB!!! Would be happy to post two pics, if that's an option.