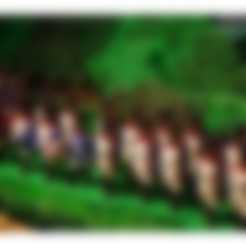 So... You've bought and painted all those glamorous units in metal - the Old Guard Grenadiers, and a set of Polish lancers, you've bought a couple of line infantry plastic/resin boxes, but are pondering the wisdom of splashing out more money on various cannon fodder units and those allied units that have a habit of disappearing off the wargames table in the first two moves. Worse than that - the resin infantry units come in 26 different poses and you're wondering about buying another box or two to get a whole unit in the same pose. Ponder no longer - I give you the first in a range of (slightly) genericised napoleonic regiments that should paint up into many different colours to hurl into battle, leaving your gorgeous units back in reserve for when they're needed.
The units are 28mm and should fit in with most makers, but feel free to scale up/down. The uniforms are intended for the later part of the napoleonic wars.
The unit includes drummer, officer and flag/standard bearer
French cavalry coming up next. Feel free to PM me if you have any particular units you would like to see. I've currently got the following in alpha :
French hussars
French chasseurs a cheval
British line inf
British rifles
British light dragoons
Prussian line inf
Prussian landwehr
Russian line / line grenadiers

Notes:
Because these come in blocks of two, supports will be required. I've included the flag and standard top as separates in case you want to drill out the standard pole and substitute some wire