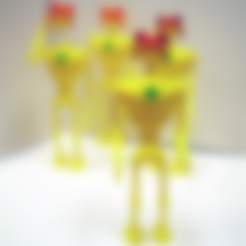 From Magnus Robot Fighter 4000 A.D. No. 15
Mogul Badur was a evil ruler who had his robot servants kidnap someone every year so he could become young and strong again, for 800 years. these are his robot servants.

Zyfor s the main robot who kidnaps Magnus, but aids him in the end. Has a weapon built into a finger. And has feelings.

Robots are self repairing when damaged, Zyfor was destroyed in a crash before kidnapping Magnus. He is still bent up through out the comic from the crash.

Notes:
Each robot has a emblem letter identifying his name, added emblems for names mentioned in comic book.

Added extras cloak with no emblem so you can omit it, head ,neck, ear/cowl pins and hands are tight clean before installing. neck will break if not careful .
All items except hands feet and emblems need supports, Cowl support blocks snap off after printing.

eyes and cowl I printed in translucent red, cowl at 60% infill, solid colors ok at 10%

Rotate cowl up above head to insert pins, then rotate Down into position.