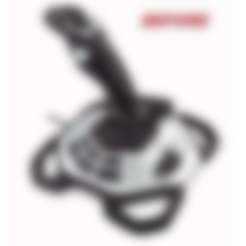 Ever wanted to transform your old Logitech Extreme 3D Pro into a little rally handbrake?

I made this small box for the joystick. You only have to keep the joystick with the electronic mainboard and the usb cable. The mainboard is fixed upside down in the top of the box wich reduce the general size.

The joystick is held on the plate by screws and bolts to prevent breaking, instead of the only four original screws.

The shifter knob is plug&play. I screwed it into the joystick with a large screw. (I will post pictures of the inside later)

The hole in the box is made to add any type of usual small clamp.

Do not hesitate to give a feedback :)