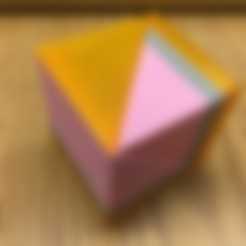 The cube can be dissected in multiple ways. There is one well-known dissection that decomposes a cube (or any rectangular prism) into its half, third, and sixth, using two simple face diagonal cuts. The idea dates back all the way to around 263 AD when a famous Chinese mathematician, Liu Hui, illustrated the idea in his commentaries on the Chinese Nine Chapters of Mathematical Arts.

Liu Hui’s dissection can be easily accomplished in a modern 3D design environment such as Autodesk Fusion 360® or similar packages. Take a cube. Slice it along a face diagonal. We get two halves. Each half is called a “Qian Du,” using its original Chinese name. Keep a half piece and slice the other along another face diagonal. We get a square pyramid, which is one third of the cube and is called a “Yang Ma.” The third solid is a tetrahedron, which is one sixth of the cube and is called a “Bie Nao.” It makes natural sense that two halves (Qian Du) make a cube and three Yang Ma make a cube. The Bie Nao are a bit unique. If we take two Bie Nao and make a mirror image of one of them. The two Bie Nao would make a Yang Ma. Therefore, if we take six Bie Nao and mirror three of them, we could make three Yang Ma and further a whole cube. It is fun to explore the visual, spatial, and quantitative relationships among these pieces.

For printing, 0.2 mm is just fine. If you choose 0% infill, you could leave some small magnets inside, when the pieces are half way in the printing process. Please increase shell to 4 if the walls are too thin.

For more information, please refer to

Notes:
0% infill makes the solids hollow; please increase the shell/wall thickness if necessary. Small magnets can be placed inside each piece about half way.

STEAM educator, learning from and working with K-12 STEAM teachers to explore new ideas of teaching and engagement. I firmly believe ART is at the core of STEM learning or all human learning! I owe my ideas and designs to the hundreds of K-12 children and teachers and university professors I have had the pleasure of working with, in multiple disciplines-- math, science,engineering language arts, social studies, early childhood education and more! All mistakes, of course, are mine! There is no warranty or liability whatsoever implied or explicit behind the designs or ideas. They are all posted for their potential educational values.

When working with children, please strictly observe all safety and health procedures! Please refer to the NSTA safety guides: http://www.nsta.org/safety/.