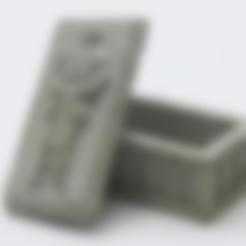 Mould for a knight's sarcophagus. Modeled in SolidWorks, looked at online images for inspiration.Size is 20x40x19mm. DIN912 M2.5x8 screws used to assemble the mould pieces. Cast in concrete.

I had trouble releasing the casting from the mould. The casting broke on the first attempt, so for the second attempt, I put the mould with the cast concrete in boiling water, so the mould softened (and got destroyed in the process). I was then able to remove the mould from the casting.