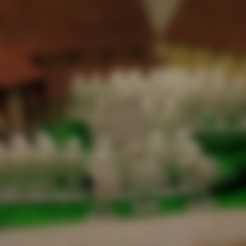 I made these figures (when I say 'made' I mean 'flung some primitives together') to bulk out some wargaming units for me to experiment with some wargaming rules. They were meant to vaguely represent saxon regulars, but actually could be any sword and shield / spear and shield regular troops from multiple periods. I didn't intend publishing them because of their 'basicness' but then thought they might be useful for anyone trying out a different wargaming period who needed to throw some troops on the table.
Warning - they are true 28mm figures, so if you want them to blend with commercial 28mm figures (which are usually more than 30mm) they would need scaling up a smidge

Painting
Undercoated with gesso
Painted in acrylics
Varnished in matte