Buildings and military units for King of New York 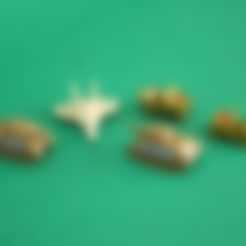 These models can be used to replace the cardboard tokens in the board game King of New York. The buildings have a hollow section at the bottom, where the corresponding military unit can be stored until the building is destroyed.

Most of the models are based on other people's models. This project wouldn't have been possible without the original authors. The sources for the various pieces are as follows:

The jet and the tank can be printed either as a single piece, or as multiple pieces to avoid overhangs. The "jet-connector" is meant to make it easier to align the pieces if your using superglue for assembly, but using it will require a well calibrated printer.

More pictures are available in my blog.