Blade of the Black Empire 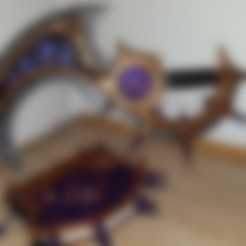 "Do not put your faith in the black blade. It will deceive you. It will not be controlled."

Continuing from the previous Warcraft related items and with the Legion expansion in horizon I started working on some of the upcoming artifact weapons. Thus I present the first one of these I have finished now: Xal'atath, Blade of the Black Empire and its off-hand complement Secrets of the Void.

This was also the first prop weapon I tried to make in "real size" so it has to be either scaled down or cut to multiple pieces (like I did) to fit standard print bed.

The in-game lighting for this would be purple, but since purple LED's are incredibly dim I had to compromise to more blue side.

Batteries (2xAA) fit inside the handle which can be twisted and removed from its place to change them. There is also a slot for power switch on the side of the upper part of the handle.

There is channels inside the whole blade to run wires invisibly from the batteries and switch to the LED's. The blade has three spots for 5mm LED's and the handle has lots of empty space inside the "eye" so I just used hotglue to fix some LED's there as well.

The book cover for the off-hand item can fit A6 sized notebook when you cut a little from the corners off to follow the round shape of the outer edge of the cover. It also features singular hole for 5mm LED in the cover, although I decided not to use that myself, but left it in the design anyway. If you don't put a real notebook inside there's plenty of room for batteries between the cover, but I didn't go for designing places for those since I abandoned the LED idea for it myself.

Painted once again using Citadel miniature paints and detailed with some faux leather.

All files checked with Netfabb, rotated, pre-split and ready for printing. If you've 20cmx20cm print bed, however, you may want to cut the upper blade once more to fit nicely.