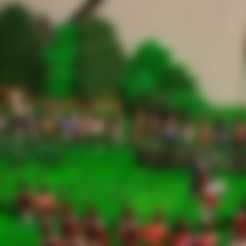 Part 2 of the AWI figures gives you the stalwart defenders of Bunker Hill / Breeds Hill. Designed as minutemen/ armed colonists, these figures will be good for any armed un-uniformed militia, and will probably be fine in pirate scenarios etc

I have provided a range of hats to fit on the heads of many of the figures to give your unit a range of variations.

I've provided 3 bases - one that matches prev bases ( 1x2 figs) but I have also added what I think is the right size base for anyone playing Black Powder rules (tell me if it isn't) - (2x2 figs at 40mm square, and a conversion base to put any of my old bases to convert them to Black Powder (they'll 'clump' slightly, but it saves arguments while wargaming)

AND I've even given you a couple of hedge/fences to defend!

Next on the design board are British Light Dragoons...