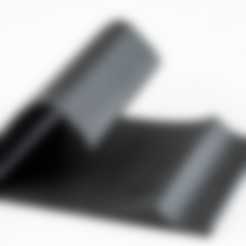 iPad stand designed for using an iPad 3 as a second monitor. I use it to hold my iPad in front of / under my main monitor.

The stand was designed with the following goals:

- holds the iPad at 42 degrees

- low visibility along the front

- easy to pick up stand and iPad at the same time

I wouldn't recommend it if you need to:

- support the device in portrait orientation (it's too small for that)

- support any other angle (the angle is fixed at 42 degrees)

- use it with other devices (it's designed specifically for the iPad 3 form factor, so it will only work with iPads that have the same design)

I also attached a larger version of the stand that should be more stable, but that version hasn't been tested.

I recommend printing the stand in PLA, it may warp or crack if printed in ABS.