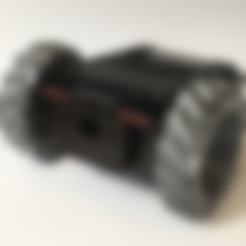 By popular request I created this chassis for my Zerobot Raspberry Pi robot. The model is the Shock Drone that is used by the Twitch character in Ubisoft's game Rainbow Six Siege. It was modeled from scratch in Fusion360.

To maintain the proportions of the Twitch drone only one battery will fit inside it. You will have to use the electronics setup from the first Zerobot (without the "Pro"). But the software and SD card image for the Zerobot Pro should work. Also there are no more M3 bolts, the upper and lower parts are connected with four small magnets (1mm thick, 3mm diameter). Banggood sells these magnet for around 2€.

Please be aware that I have not tested this chassis! Everything was designed and assembled in Fusion360 and I made a quick print to see if the part fit together. Minor modifications might be necessary to make everything work.

The current version does NOT include electric shock darts.

I also want to thank user CaveiraMain for providing the screenshots after which I modeled this.