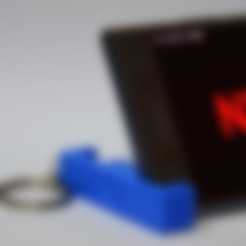 I called it M.A.P.S. keychain in short. Lately I am addicted to Netflix movies and I find that my previous build phone stand is a bit annoying. Sometimes I just can't get rid of the reflection captured by my glossy screen because of limited space on table and also the angle of my phone stand is fix.

After a few fixed-angle with different styles, I finally bumped into this multi-angle phone stand, end up with "longer" keychain (which is not what I want) but make the phone stands sturdier.

Made up of three parts (I called them body, spinner, and pin) which can be printed at once with a layout as one of the picture above (you need to rotate the orientation of several parts).