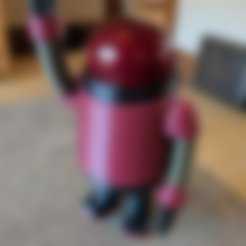 I recently received several bulb covers from a warehouse that's being converted in to an IOT space for makers and companies. I thought it'd be neat to turn them in to something that reflected what the building was going to become and use some of the technology going in to the building as well. This is my first design out of four since I have four bulb covers, and the design is named Welbey. He stands at around 23cm (10.5 in) on his own and took about a weekend of 3d printing to make.

This should be an easy robot to print and assemble. All the parts are keyed and separate as well, making it hard to have misaligned parts while giving the option to have the robot in any colour you want. You only need a little bit of superglue to assemble him, but 5 minuet epoxy works well and gives a bit of breathing room.