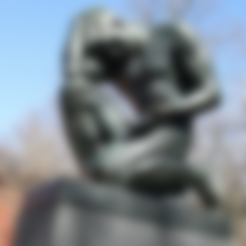 This is a photogrammetry scan of the statue "Urheilija" (Finnish for "Athlete") on the Akseli Toivonen sports field, Käpylä, Helsinki. The statue was sculpted by Erkki Toukolehto and unvelied in 1938.

I took some 130 photos of the statue with my Canon 1000D. I then followed the instructions here: https://pfalkingham.wordpress.com/2017/08/14/automating-free-photogrammetry-scripts-i-use/

The scripts there are for Windows, and since I don't have a Windows machine, I needed to adapt them for Linux. I will probably write a blog post about the process later.

After Colmap and OpenMVS gave me the .obj file, I imported it to Meshlab and pruned off the parts of the mesh that weren't of the statue. Once that was done, I exported the mesh as an STL.

As the final step, I imported the STL into Blender for final cleanup, decimation and addition of the cube that repairs the base of the statue.