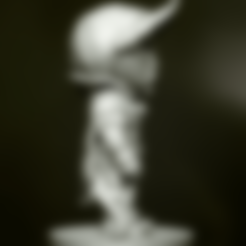 Abandoned as a child for being a tiefling, Mantis was raised by the streets as a beggar. Eventually a Cleric of Kelemvor took pity on him and raised him to be a Cleric of the Grave. He was taught all are equal in death.

All that remains of his past is an empty scabbard he wears on his belt and the thought that not everyone can be trusted.

Traditional sculptor and self taught 3d modelor.
If you would like a commission or to support my work visit my patreon @homunculuscreations