The Three Graces at The Louvre, Paris 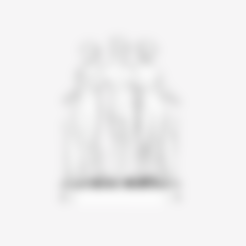 Antonio Canova’s statue The Three Graces is a Neoclassical sculpture, in marble, of the mythological three charites, daughters of Zeus – identified on some engravings of the statue as, from left to right, Euphrosyne, Aglaea and Thalia - who were said to represent beauty, charm and joy. The Graces presided over banquets and gatherings primarily to entertain and delight the guests of the gods. As such they have always proved to be attractive figures for historical artists including Sandro Botticelli and Bertel Thorvaldsen.

The three nude woman, symbols of beauty, arts and fertility, stand together in a line in a composition to signify their alliance. The marble, lifesize piece was created in the 11th Century AD, discovered in Rome on mount Caelius. The piece is based on a previous artwork produced in the hellentistic period (330-30 BC) that can be found at the Metropolitan Museum of Art, New York.