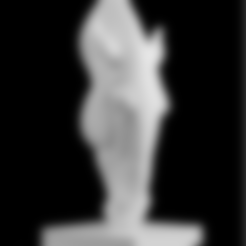 Still Water is a 2011 outdoor bronze sculpture of a horse's head by Nic Fiddian-Green, located at Marble Arch in London, United Kingdom. The 33 feet (10 m) piece was commissioned to replace an earlier and similar, but slightly smaller, work, Horse at Water. This was installed at the same site temporarily, but then moved to Daylesford, Gloucestershire, the home of Sir Anthony and Lady Carole Bamford, who had commissioned it.

In 2012, Fiddian-Green cleaned the sculpture himself, using a cherry picker. He said:

It is a great honour that Westminster city council have made this a permanent work of art for the city. I am humbled that so many people have written to me and that I am still able to uplift and inspire people as they pass by, rushing to work.