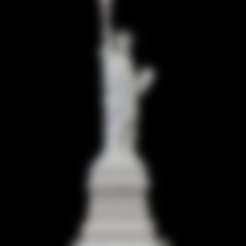 The Statue of Liberty is a well known neoclassical sculpture on Liberty Island in Manhattan, New York. Designed by Frédéric Auguste Batholdi it was given as a gift to the United State from the people of France in 1886. The statue depicts a robed female figure, Libertas, the Roman goddess of Freedom who holds a torch and tablet evoking the law.

The colossal statue is 56 meters tall and is made out of bronze, erected in 1924