Satyre and Bacchante at The Louvre, Paris 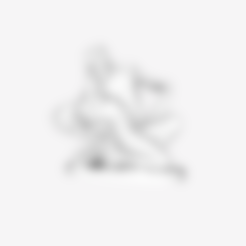 Charles Baudelaire blamed him for the "pitiable state of sculpture today" and alleged that "his talent is cold and academic," while Gustave Flaubert felt that he was "a true Greek, the most antique of all the moderns; a man who is distracted by nothing, neither by politics, nor socialism, Fourier or the Jesuits […], and who, like a true workman, sleeves rolled up, is there to do his task morning till night with the will to do well and the love of his art." Both are discussing the same man, one of the leading artists of late Romanticism and the "king of the sculptors" during the July Monarchy: Jean-Jacques Pradier (23 May 1790 – 4 June 1852), better known as James.

This marble group directed by one of the greatest romantic sculptors caused a scandal at the Salon of 1834. The government refused the acquisition, the Count Anatole Demidoff who bought it and took it to Italy. Pradier traits we wanted to recognize himself and his mistress Juliette Drouet.
A classic judged licentious about
Bacchante crowned with vine leaves, languidly is reversed against the satyr, easily recognizable by its legs of a goat and her face. The Bacchanal, Bacchus procession is accompanied by the mad scenes in which the drunken bacchanal surrenders to his senses in the man's arms animal that discovers. She attracts and repels at a time.
It emerges from this group carnal eroticism that caused a scandal in 1834, when it was exhibited at the Salon. Yet presented in a small room to the side, he did not let the indifferent criticism. About the Landon summarize, could not be better, the general opinion: "an admirable piece of performance and expression; but what expression! We do not know the destination of this group; but certainly it is not in an institution for young people that will find its place. ".