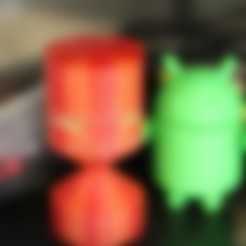 "Do you have any idea how many outside systems I've gone into? How many programs I've appropriated?"

If you don't know the unbridled power that is Master Control Program educate yourself: http://youtu.be/dp7dBbaZUIk?t=12s

MCP has even been in a rap video: http://youtu.be/iIMb3hGzWW8

Wow, "he" was even in a bit more adult rap video: http://youtu.be/0MP_G6arpVI

See! MCP gets around booooyeeee!

Instructions:
- Print "MCP.stl" which contains both head and base
- Slide a coffee straw into the base and head trimming with scissors if needed
- Take a red marker and color the two panels between his eyes
- Then with an orange marker color 2 panels on each side of the red and keep alternating
- Color base with same method
- Use a green marker and color in the eyes
- Spin MCP's head and quote any one of his epic lines from the original Tron!

"
I'm going to have to put you on the game grid.

Train him for the games... let him hope for a while... and blow him away.

With the information I can access, I can run things 900 to 1200 times better than any human.

I feel a presence. Another warrior is on the mesa.

Master Control Program
The Master Control Program (MCP), voiced by David Warner, is the main antagonist of the first film; an artificial intelligence created by ENCOM founder Walter Gibbs and improved by Ed Dillinger that ruled Encom's mainframe computer. During the rule of the MCP, many programs were enslaved and forced to play games against its henchmen. To gain information and power, the MCP began to blackmail Dillinger into doing its bidding, threatening to reveal his plagiarism of Flynn's creations to the public. Dillinger used the MCP to administer the company's computer network (in effect an AI Superuser); but the MCP, empowered by him, began to steal data from other systems, and came to desire control of external corporations and even governments. At the climax of the film, the MCP is destroyed by Flynn and Tron.
Prior to its destruction, the MCP would end most of its conversations with Dillinger with the phrase "End of line". In the sequel, Tron: Legacy, the digital world has a music club called the "End of Line Club", as a tribute to the Master Control Program.

I have also uploaded my Sketchup master file for your modding pleasures.