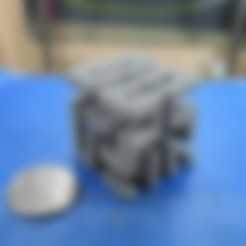 While looking for new interesting things to print using water soluble PVA support, I decided I want to try to make a Hilbert Cube: http://en.wikipedia.org/wiki/Hilbert_cube

After trying and failing to do it in openscad, I worked around it's limitations by writing a ruby script that generates openscad code. This ruby script can create a 1-3 iterations of a hilbert curve in 3d. I borrowed code from a Processing script by Thomas Diewald at http://www.openprocessing.org/visuals/?visualID=15599

Unfortunately after doing this, I realized it wasn't really a hilbert cube as the shape is not one continuous curve. :( Still it looks cool and is pretty much impossible to print without dissolvable support. It would be awesome if someone smarter than me would make a proper parametric hilbert cube generator, plz!

I also found a really nice and proper curved hilbert cube by Carlo H. SÃÂ©quin at http://www.cs.berkeley.edu/~sequin/X/Hilbert_Cube/ I resized it and made a support model for it. I don't know what the license is on it, hopefully he won't mind me reposting it here. The problem with this model is that it is curved in a way that makes it a more difficult print.

nowipe.rb is a script that takes a merged gcode and removes all wipe movements. The current version of replicatorg's dualstrusion merging adds movements (weather you tell it to wipe or not) that results in z offset problems causing bad quality prints. I've had the best luck with dualstrusion by not doing any wipes at all.